The scaphoid, a small bone on the thumb side of the wrist causes more hassle to patients and surgeons than all the other wrist bones put together. It is an important bone in the wrist, in that it bridges two rows of wrist bones (the carpus) and takes about 60% of the total load. That means that when you put full weight through your hand, such as arising from the bath, the amount of force going through the wrist is equivalent to your full body weight and compared to all the other bones in wrist the scaphoid takes 60% of that weight, hence its importance. It is notorious because fractures of it do not always immediately come to light. 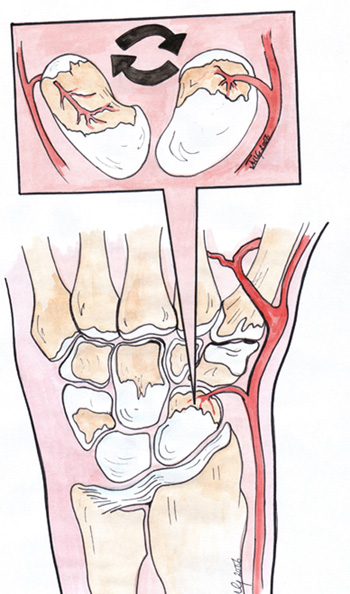 It is a common scenario that someone falls onto their wrist, goes to casualty and has a x-ray which is reported as normal and the injury is classified as a sprain and yet later on it is revealed that the scaphoid was actually fractured. When the bone does not heal it is called a non-union. Sometimes the time frame to diagnosis is short but sometimes it may not be made until many years later when arthritis has developed. The reason for this is entirely due to the blood supply of the scaphoid. 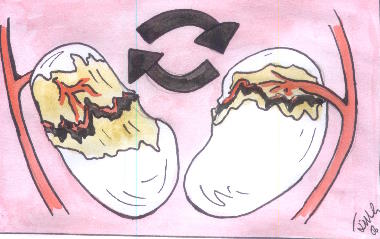 If you look at the bone as if you were looking at the back of your hand/wrist, then virtually half of the scaphoid nearest the forearm bone (the radius) is inside the joint (it is called the proximal pole). This means that it is covered by articular cartilage and does not have any soft tissue attachments.In general the blood supply to a bone comes from its soft tissue attachments so the only way the proximal pole can receive any blood supply and nutrients is through the rest of the bone. The articular cartilage can obtain some nutrients from the joint fluid but not much will pass into the bone itself. Thus if there is a fracture of the scaphoid in the proximal pole or waist where there is little or no soft tisssue attachment, then the blood supply will be damaged reducing the chances of primary healing and increasing the risk of a non-union.

There is now good evidence that smoking delays the healing and there is a much higher risk of non-union in smokers (see general complications section) and the following link.

Scaphoid fractures have been classified in a number of different ways but the critical distinction is placing the fracture type into either undisplaced or displaced groups. The position of the fracture in the scaphoid is also important as the closer the fracture to the proximal pole the higher the risk of non-union.

There is good evidence to indicate that there is a much higher risk of non-union in the displaced fracture group. Thus there is a tendency to perform surgery on patients with these fractures to try and reduce the risk of non-union and promote healing. Totally undisplaced fractures have traditionally been treated in a cast for up to 8 to 10 weeks but should they be fixed acutely? A number of trials are looking at percutaneous (through the skin) fixation of the scaphoid as a primary treatment. This would avoid the need for a full cast though a protective removeable splint is still needed. A recent multi-centre trial - the SWIFFT trial strongly suggests that minimally displaced fractures (>2mm) can be treated non-operatively. The full results of this trial will be published soon.

One thing that years of treating fractured scaphoids has taught me is that it is a very querky bone. It is extremely unpredictable when trying to predict healing. There are no absolute guarantees when it comes to the scaphoid! Some scaphoid fractures which one would expect to heal don't and some which look unlikely to heal do!

My current practice for acute fractures is as follows:

These treatment options are guidelines as each patient and his/her fracture has to be put into context with other factors. Are there any other injuries? Is it an isolated fracture or part of a high energy injury scenario? Is the other wrist injured? The restriction of having casts on both wrists is huge, so there would be a strong indication to fix at least one side to aid in washing and one's normal bodily functions..

Non-union of the scaphoid

The long term consequences of a failure of the scaphoid to unite are usually weakness and sometimes pain, but more importantly the high risk of developing arthritis. The scaphoid may stick together with fibrous tissue rather than bone and in this instance some stability may result which lessens the symptoms and reduces the risk of arthritis. However, if the fracture was displaced at the time of the original injury then it is unlikely to join at all, leading to eccentric movement of both broken ends. In this scenario arthritis is probably inevitable and it is just a matter of time before it presents, probably dependent on the level of physical requirements for the hand.

If we recognise a non-union early, especially if it is causing symptoms then generally surgery is recommended to attempt to establish bony union. There are many types of operations available to make this attempt at scaphoid union, but in my opinion no single operation is suitable for all scaphoid non-unions. The site of the fracture, the length of time since injury, whether there have been changes within the bone itself (cystic change or avascular necrosis) and whether it is displaced, undisplaced or collapsed, are all important factors to be taken into consideration planning surgery. Investigations such as CT scanning or MRI scanning are frequently used to make these assessments. An injection of gadolinium may be given at the time of the MRI scan to help determine the blood supply status (vascularity) of the proximal pole.

The different types of operations include the following:

My practice is quite simple - if the fracture is virtually undisplaced and there has been no shortening or collapse then a vascularised graft is appropriate. The rationale for this technique is that it addresses the problem of the blood supply to the proximal pole. The operation involves raising a piece of bone from the side wall of the radius with its blood supply still attached to it and inserting that piece of bone into a trough created across the scaphoid fracture. Essentially this results in bridging the two scaphoid fragments with a piece of live bleeding bone. If possible I try to avoid inserting any metalwork relying on pushing the graft into the trough as a 'press fit'.

If there has been some displacement and the curve of the scaphoid has collapsed then I recommend a bone graft taken from the iliac crest (pelvis) as it is stronger and can restore the length of the bone. It does need an internal screw to support the graft. 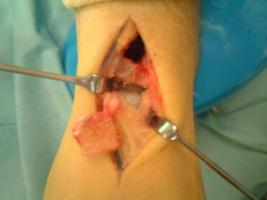 Comprehensive articles available for perusal include the following:

As already mentioned smoking reduces the chances of the graft taking but even in non-smokers there is no absolute guarantee of success in achieving union. I expect a 90% success rate in compliant patients.